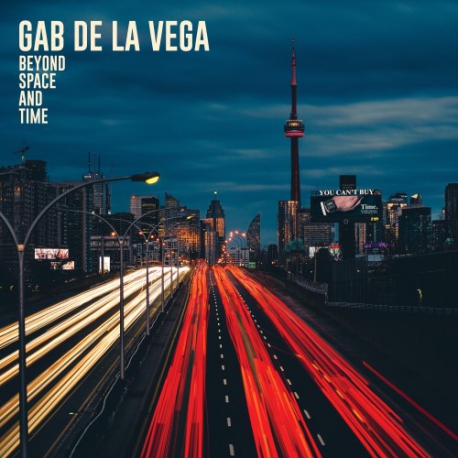 IF YOU WANT TO ORDER THE LIMITED EDITION (SPLATTERED TRANSPARENT BLUE VINYL WITH RED AND WHITE STRIPES, REMEMBER TO SELECT THE RIGHT ITEM. It's slightly more expensive. Default Item is Transparent Blue.

Beyond Space And Time is the third full length by Gab De La Vega, a singer-songwriter dedicated to folk, punk and indie sounds who, from his experience in the hardcore punk world, has been able to explore and follow a new path made of hints to modern folk and increasingly present traits of alternative rock, until today, a key moment in his creative journey.
Active with this project since 2011, Gab De La Vega goes full band with this album, after the very successful experiment of I Want Nothing, single released in 2017.
The third album was anticipated by Perfect Texture (which sees the collaboration with Nicola Manzan, known for the project Bologna Violenta) and YYZ, two singles with very different souls, to reveal the different sounds present in the album.
Eleven varied tracks that create a compact and solid work, in which the singer-songwriter explores more rock and explosive sounds, always keeping in mind the identity cultivated in recent years and the influences collected over time.
The distance covered since the previous Never Look Back LP is easy to perceive and it is inevitable to see the new dimension that this musical project acquired with this album.
The new work was recorded and mixed by Simone Piccinelli at La Buca Recording Club in Montichiari and mastered by Jack Shirley, Grammy nominated producer and sound engineer (Deafheaven, Oathbreaker, Jeff Rosenstock, Gouge Away...) at The Atomic Garden Studio in Oakland, California.
Gab De La Vega now performs both solo and with a full band lineup as Gab De La Vega and The Open Cages.