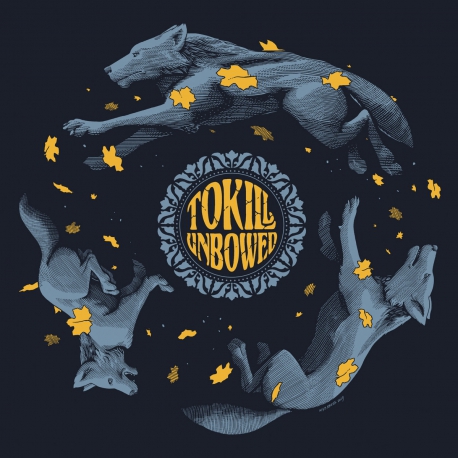 GET ONE OF THE LAST FEW COPIES LEFT!

Tracklist:
Side A: Unbowed, Adrift

Side B: Commit Suicide, Fall Down (Growning Concern Cover)

Here's a Statement from the band:

Playing live truly defines a band like us, so writing songs has always just been a part of something bigger, given how much ToKill has meant to us – and hopefully to some of you.

When we decided to reunite for this show, we started practicing and everything came out so naturally that the flow brought us to write two new songs. Thinking about it, we then decided to record them since they mean something in the journey of this band: they represent the five of us getting back together after all these years doing what we like doing together, and sharing them seems the right thing to do for us. So we went to our lifetime friend Alex’s studio, Hell Smell, and everything felt so smooth.

We truly believe these songs are some of the best we’ve ever written, so we wanted to do something special with them and we decided to add two more songs to the recording. The first is a song off our first record which we always wanted to record with a recording and an execution which would more sound like us. The second song is truly meaningful to us, since it’s a cover of a Growing concern’s song, a band which means a lot to us. We really wanted to do that and dedicate this tribute to our friend Gianni, who’s no longer among us.

All of this doesn’t absolutely mean that we’re getting back together or that there will be more ToKill releases after this one: don’t read inot this anything more than it says. You know we like being totally transparent.

So, for the Venezia Hardcore fest we’re releasing a coloured 7”, with an illustration made by our friend Marcello Crescenzi, it will be limited to 350 hand numbered copies and will never be repressed.

We wanted this 7” to be released by a friend who knew exactly what we wanted: no bullshit no attitudes or egos. So Gab and Epidemic Records will take care of the preorder and of the physical sale of the vinyl. All the instructions will be given in time: there will be ways to order it or to grab one at the festival. Everything concerning the release will be handled by him.

The songs will obviously also be online,forever for free, on bandcamp and on every existing streaming platform. You won’t need physically buy the 7” in order to listen to it, no fear.

We just hope you could maybe learn the songs by the show: that would really help us in playing them, you know how much you being a part of the show is important to us.

See you in Venice. Let’s tear the place down.

Fall Down originally written by Growing Concern. It’s dedicated from us to the memory of our friend Gianni. We owe you very much. Godspeed.

We’ll be forever grateful for this journey. Thanks for being part of it.