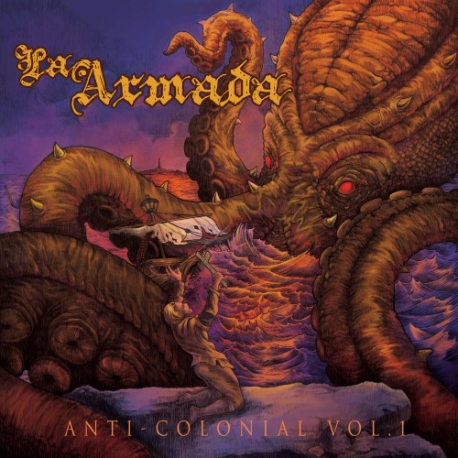 LA ARMADA joins Epidemic Records to release their new LP in Europe!
Born in the beginning of the 2000s in Santo Domingo (Dominican Republic), this band moved to Chicago, IL in 2007.

Their new album, called “Anti-Colonial Vol.1”, out via Creep Records (US) and Epidemic Records (Europe), is a call for resistance in reaction to increased visibility and power in the hands of the “alternative right”, religious extremists and white supremacists in the United States and worldwide.
Along with the announcement, La Armada released a video for “Fire”, first single out of the album.


The band said: “The video projects the feeling of isolation and anger that this political climate can produce on those directly affected. The song is a powerhouse punk assault with a heavy Latin-infused breakdown at the end.”

To promote the album they left on tour with Propagandhi and Iron Chic in North America and will come back to Europe soon, after an incredible performance at Punk Rock Holiday last year.

La Armada is a mix of wild, sharp and heavy riffs, angry vocals, irresistible breakdowns; a thrash / hardcore / punk crossover with politically meaningful lyrics.
An explosive sound, ready to detonate, for fans of: Propagandhi, Converge, Bad Brains and Sick Of It All!

CD Edition is out via Creep Records, available in Europe via Epidemic Records.