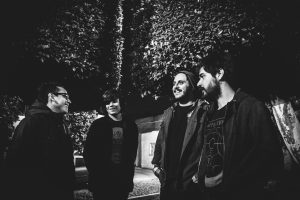 Joliette is one of the most acclaimed acts from from Mexico. They are not new to the European public and they gained a respectable position by touring and producing incredible songs that transcend genre definitions, which is the reason why they’d label their own sound as “post-everything”.
They’ve just stared a long European tour and they’ve just put out El Alphabiotista 7″ (Epidemic Records).
Here’s a chat we had with the band just before they left for Europe.

EL ALPHABIOTISTA 7″ IS ALREADY AVAILABLE ON ALL MAIN DIGITAL PLATFORMS:

It’s been a long time since your last official release. Why did it take you so long to come up with these two brilliant songs to be featured on El Alphabiotista 7”?

The past couple years have been pretty hectic for us. Since our last record came out in 2016 (Atáxico) we had been touring non-stop throughout Mexico, Europe, North America and South America. During 2017, our intention was to go into the studio as soon as possible and have a couple new songs recorded, but before that we parted ways with Gabo, our previous drummer. Time was upon us and we decided to record a whole new album to make up for all this time without any new stuff. The first song from our upcoming album is “El Alphabiotista” and is being released on a 7” quite soon. The b-side of said record is one of our favorite songs, “Dolor de Marinero en la Costa del Vesubio”, this song was actually recorded originally in 2014 but was never properly released, it was part of a split that never came out. We used its original recording and just added a few layers of guitars and that’s it.

You recently put out a split tape with Frameworks (Deathwish Inc). How did it happen? What can you tell us about your songs on that tape?

We had Frameworks visit Mexico during the summer of 2016. By that time, they were promoting their latest album to date “Smother” and we were just releasing “Atáxico”. With both bands playing songs from these new records and touring together, we figured it would be a great idea to have a live session split on audio and video playing some new songs each band. Our songs, “Henry Coyote” and “Tíonkel” are both featured on 2016’s “Ataxic” which is our most aggressive record to date. Due to unforeseen circumstances, the split was released a year and a half later than it was recorded, so it was actually nothing new by the time it came out, but still works as a reminder of the good times we’ve had with Frameworks since we met them.

You’re about to embark on a long European tour, but this is not your first time on this side of the Atlantic. What did you like the most in your previous experience and what do you expect from this one?

Each time has gotten better in Europe. The hospitality is probably the most outstanding thing from these tours. Also, playing with bands you look up to (Raein) and getting to know amazing bands and friends (Storm{O}, for example) makes it an unforgettable experience. This time we’re super excited to play so many fests we didn’t have the chance before and getting to share stage with A LOT of bands that we love.

Mexican music scene seems to be very much alive, even if it’s not really well known around here. Is there any good Mexican band we should be aware of?

Yeah, there’s quite a few. Active and inactive, we love: Walle, Annapura, El Shirota, No Somos Marineros, Apocalipsis, AMBR, For Dummies, Nazareno el Violento, Akûma, among many many others that don’t come to mind right now.

What are you main sources of inspiration as a band? What influenced you in the moment you were writing these two brand new songs?

Like stated before, only one of these is a new song but anyway, it’s hard to reply to a question like this. We have a lot of bands that we love in common, but we also have our very own influences going in the band. El Alphabiotista is a song that talks about fear of death. In general, this whole new and upcoming album deals with “the dark side of emotions”. “Dolor de Marinero…” on the other hand, it’s just a story about an exploding volcano, but still is probably our most “famous” song and it’s weird we’re officially releasing it four years later.

Going back to the influences thing, bigger bands like Glassjaw, Thrice, Deftones, At The Drive-In, Poison The Well, Radiohead… they’re all our major inspirations as far as all their work goes. But since we’ve been a touring band for the past five or so years, we’ve also drawn a lot of influences from all the screamo and punk/hardcore community… bands like Birds In Row, Storm{O}, Viva Belgrado, Ostraca, and many many others have affected us greatly in the way we want to approach our music and this whole community has been super welcoming to us, we feel like we’re definitely a part of this now.

Is there any European band you’re looking forward to play with?

Yeah! Cassus, Birds In Row, Kid Feral, June Paik, and many many more!

What’s after this European tour for Joliette?

We’re releasing a new record and touring a little in Mexico supporting it. 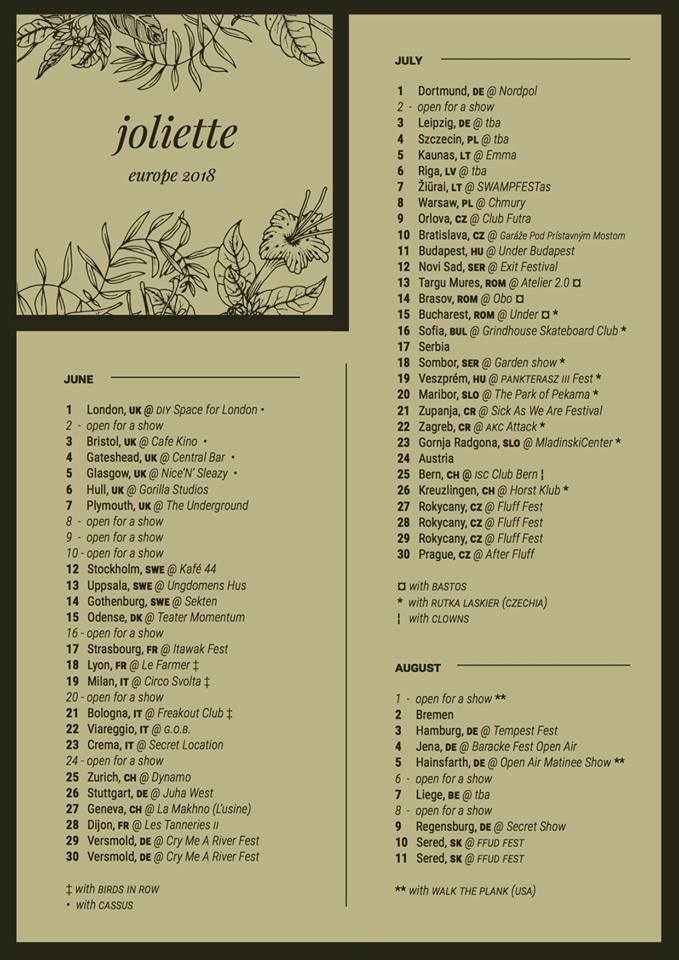